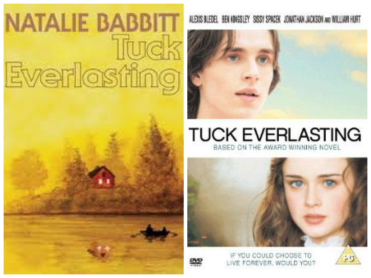 I have to give the people behind the film version of “Tuck Everlasting” some serious credit. Here’s the deal: Wasn’t that big of a fan of the book/movie, mainly because it TERRIFIED me as a child. It was the first time I’d ever addressed a big, existential life question. Would you drink from the fountain of everlasting youth?

I mean…yes. Was the impulse. Yes was totally the impulse. I was probably in the second grade. It was the easier answer. If you could never die, wouldn’t you want that?

And then of course, my teacher had to take it a step further…”But what about all the people you loved? What if they couldn’t drink from the fountain?” And that was just too much for my mind to handle. (That moment is up there with the time I was told the sun was going to explode in a few billion years. I literally began to have terrible visions of my great-great-great-great-etc. grandchildren living on an apocalyptic version of earth.)

The music is really the key here though— why I’m even talking about this. Because it’s one of those melodies that just completely transports me back to a feeling. My stomach gets all twisted and confused. It reminds me of not understanding, trying to understand and beginning to realize that what I couldn’t understand was something nobody ever really would.