Raise a Glass to Sarah Paulson

Call up Little Big Town, because I have a serious girl crush on Sarah Paulson. And why not? There’s just so much to crush on about her…from her powerful pull off of the Marcia Clark-perm, to her killer delivery of the line, “That motherfucker!” [cut to commercial!], to her kick ass perspective on being a woman in Hollywood, I’d say there’s a lot to love about Ms. Paulson. I’d like to briefly touch upon the three above examples in toasting this Emmy-nominated star of “American Horror Story” and “The People Vs. O.J. Simpson”. Here goes nothing: 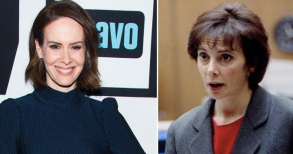 A toast to Sarah Paulson, my dear, dear, dear friend. Sarah, your ability to make a hairstyle that was so ripped apart by the media in the 1990’s look regal is astonishing. Who would have thought that in the midst of a murder trial with overwhelming evidence against the defendant that the prosecutor’s hair would be such a huge topic of discussion? Also, your gravitas while delivering slam dunk, sassy comebacks was pitch perfect! I will always think of you in the future, every time I utter the word “Motherfucker”. It is a testament to your talent that one of my favorite phrases will forever be linked with your performance. 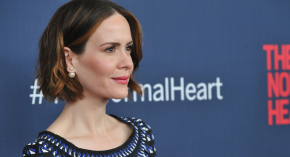 And finally, your blisteringly honest statements about industry sexism really won me over. That interview with “The Hollywood Reporter” was the real kicker. When you said, “I’ve never been asked to play a leading lady without being asked to be a blonde…In order to be considered a romantic lady opposite some hunky guy,  I needed to have long blonde hair…”, I was

shocked. But I also wasn’t shocked, and that’s a major issue. What is this standard telling women everywhere? As you remarked, it does something funny to your mind, your perception of yourself, when you’re told that how you look isn’t pretty enough, sexy enough, etc.

By playing Marcia Clark, a tenacious, complicated, real woman, you have given viewers a more humanizing, fuller picture of one highly scrutinized woman’s reality during that 1995 trial. It was beautiful, and I look forward to your Emmy win.