When my mother was a little girl, she had two favorite toys: First, her Barbie whose

breasts, when you twisted the doll’s left arm around, grew a cup size. (Alias: “Teen Fun Skipper.” Ew.) And second, a board game known as ‘The Bride Game.’ 1971 was a strange time for feminism… Both of these items remain in my mother’s possession to this day, which indicates her penchant for hoarding mementos, and her futile hope that this ratty Barbie w

ill be worth something major in the future.

The Bride Game, although less explicitly strange than Teen Fun Skipper, is still wildly wacko. The goal? To be the first ‘Bride’ to make it down the aisle. While moving across the board, players have to acquire something old, something new, something borrowed and something blue. CAN YOU BELIEVE THIS WAS A GAME?

Through doing a little research, I’ve learned that Selchow & Righter, the minds behind Parcheesi and Scrabble, really wanted to break into ‘Girls’ Games’. As a result, they tossed around a whole bunch of ideas– including The Bride Game and the Emily Post Popularity Game. (Whatever that is, I don’t want to know. Just kidding. I 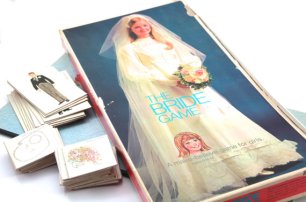 totally do. The goal for this one?

Have you ever played Scrabble? That game requires some serious thought and skill. However, does that make it a ‘Boys’ Game’? Presently, no. But in 1971, you bet it did! The Bride Game is truly the easiest game on the planet– trust me, I’ve played it. While a ‘Boys’ Game’ requires players to think critically, a ‘Girls’ Game’ demands that players need only follow a simple set of directions, sticking to a prescribed path. Is the implication that the Bride Game’s subject matter appeals distinctly to girls? Or is it seen as the intellectually suitable game for a woman?

Can we get back to politics, please?, Rantin', Wild Stories

All things just keep getting better, and that couldn’t be more true about Netflix’s reboot of Queer Eye. I have managed to scarf down eight episodes in two days, and I […]
We Should All Be Watching Queer Eye
Loading Comments...
Comment
×
%d bloggers like this: