When I decided to go on my solo-trip to Budapest, which in

hindsight, I’m sort of amazed that I did…because I am actually fairly inept when it comes to travel, I met my brother’s Hungarian doppelgänger. Strolling along the Danube, being super wanderlusty, I was taken aback by the sight of a blonde boy popping into a coffee shop. His hair was just like my brother’s, there was something about his face that seemed familiar, and they were built similarly.

Naturally, I followed him inside. Trailing behind him for two minutes, inspecting things that I wasn’t planning on purchasing, I finally summoned up the courage to ask him to take a photograph. THIS was too insane! All the way in Budapest, I’d found a quasi-Ryan Carmichael. Unfortunately, right as I began to walk towards him, he linked arms with a girl. While I was cool to walk up to him on my own, there was something strange about explaining the entire scenario to another party. It seemed too risky. Without buying anything, I exited the coffee shop, and continued to stroll.

Well, guess what? An hour later, when I was sitting down to lunch, the boy showed up at the same restaurant! It was fate, and I had to take a picture. 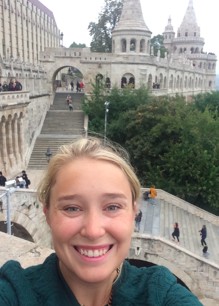 This is why I don’t recommend traveling alone. Photos end up looking frightful.