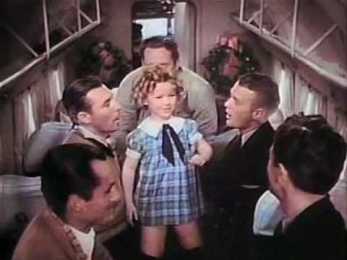 I have always adored Shirley Temple. I remember watching “Heidi” with my friend Madison, and falling in love with her pep, spunk and verve. She’s undeniably cute–there’s absolutely no question of that. But at the same time, as I’ve grown up, I’ve noticed a fairly gross, perplexing trend: It seems like Shirley Temple is always, always, always being sexualized. Now, this is one thing for a grown woman, but a whole other can of beans for a CHILD STAR.

When people talk about the young celebrities of today, harping on how sexed-up our society is, they neglect to remember how deeply troubling Shirley Temple’s portrayals often were. Even as a little girl, I recall watching “Bright Eyes” and finding it super strange that Shirley was always the only child in large groups of men. On top of that, the men would literally pass her around, kissing her and touching her. “The Good Ship Lollipop” is a fun number, but it continues to strike me as bizarre. I know that in no world would that reality be my own…It all just seems very exploitive. 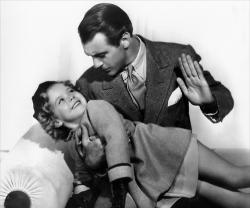 I know this subject has been previously addressed, and I found an interesting statement on the role of media in perpetuating this perception. Kristen Hatch writes that critics, in an attempt to garner laughs, said things like: she “doubtless has more sweethearts than anyone else in history, including Cleopatra,” and “for a nine-year-old girl she has done all right with the men.” WHAT?! This tacit acknowledgment is

frightening and unacceptable to me. For the media to so willingly accept and disseminate this, makes me feel that the issue must have been spurred onward by Hollywood producers/Shirley’s handlers. If this type of statement is considered humorous, I don’t doubt that the judgment was being encouraged.

To be fair, I don’t feel that every Shirley Temple film makes me as uncomfortable as “Bright Eyes,” “War Babies” and “The Littlest Rebel”, but I have to wonder: Who was Shirley’s advocate? At a time when producers had so much clout and power, I hope that someone helped her navigate safely through murky waters.