A Prayer for Owen Meany

When John Irving spoke at my high school, I was in tenth grade. While the Upperclassmen sat in the auditorium, the Underclassmen had the great privilege of watching a live-streamed version of his speech. (This was probably the first time I questioned the merits and limitations of technology. What’s the point of a guest speaker via video?) Ignoring the typical writer prompts, instead of discussing his books, process, passions, Mr. Irving launched into stories of a sexual nature. I remember thinking, “If we can’t even watch PG-13 on bus rides, how the heck is this guy sanctioned?” …But I kind of loved it. His evident disdain for rules and his distrust of private New England high schools amused me.

After his visit, I checked out The World According to Garp from the library, but got distracted by Sophomore year things: singing in the choir, reading a widely circulated email chain, the works! So, with a brief introduction to John Irving, I gave up reading his books for six years– until last week. 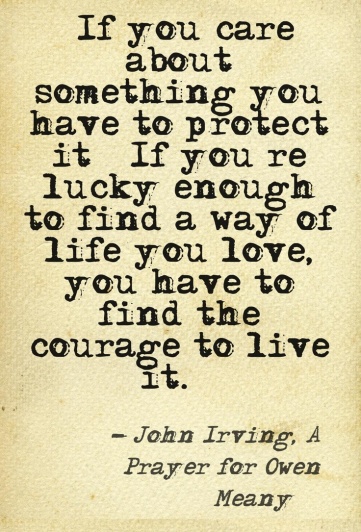 A Prayer for Owen Meany is my new favorite book. Upon my completion of it, I had to take a minor break from reality for a few hours. My thoughts were swirling around and around, and my heart felt heavy and light and then heavy again. It’s one of the funniest books I’ve ever read, and it is also one of the most profound. I keep coming back to this Post because I don’t know how to go about capturing the tone of Irving’s masterpiece. (Maybe the trick is not to try, and to hope that loyal readers of Lucy in the Sky with Cooper will trust my recommendation?)

Owen Meany is an unusually small boy with an oversized sense of self and purpose. To take a note from Simon and Garfunkel, if you’re weary, feeling small, A Prayer for Owen Meany is the answer. It’s a spiritual text that doesn’t abide by one particular faith, and doesn’t require that you do either. Going into the Holidays and the New Year, there’s so much to grapple with in assessing 2016. A Prayer for Owen Meany will give you perspective. It will give you hope. And it will guarantee you a very thoughtful new beginning. (On top of this, some of the funniest scenes take place at Christmas time. Why not give it a go?)

By carmichaelaveryjane
On December 5, 2016
3 Comments