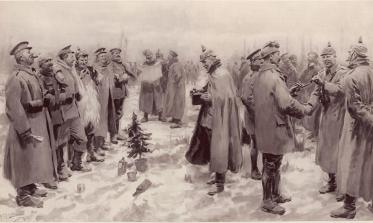 I vaguely remember learning about the Christmas Truce of 1914 in my tenth grade European History class. My teacher particularly liked soccer, or ‘football,’ as she called it, even though she was born and raised in Connecticut… I recall being shown a rather iconic photograph of German, French and Irish troops battling it out in a game of football. I imagine I thought, “Wow. That’s impressive. That’s bold.” But I’m certain I did not truly process the true meaning of this temporary truce.

Over the course of a week, Garrett and I watched “Joyeux Noel,” a part-French, part-English, part-German endeavor that features Diane Kruger, among other European notables. Exploring the Christmas Truce on the Western Front, “Joyeux Noel” is an astounding visual feat, with an exceedingly well written, keenly understanding, script. The film’s emphasis on the unifying power of music holds a special place in my heart. (Not that I consider myself astoundingly musical, but I do know basically every Christmas song from my Madrigals days…Oh, Fields of Gold, Fields of Gold.) “Joyeux Noel” made me want to sing again.

When I glanced over at Garrett, as we were watching, I could tell that he was visibly moved. It struck me, not for the first time, how blessed it is that my generation will (hopefully) never see the draft in action. Men of fighting-age. That’s my boyfriend. And, horrifyingly, my brother. That’s every one of my male classmates…They’re just young men, learning about themselves and discovering what they’re good at, what they’re bad at, what they care about.  I know, at the very least, that my brother and Garrett do not have hate in hearts, or feel like there’s some crusade to fight—as “Joyeux Noel” frames the War’s mission in one of its most devastating scenes. And guess what? Neither did many of those young men in 1914! They were fighting for survival, in a war they didn’t understand, in a war that put entangled foreign alliances in a whole new light. 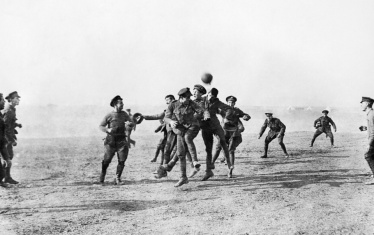 “Joyeux Noel” made war seem less foreign to me, and so much more human: these are just young men. Young men that like having coffee with their mothers, that like playing football with their friends and have crushes on other young women or men. There was no bad or good side. And, the sides were established by politicians, upper level administrators that never went to war themselves. Gah! You know when you watch that moving movie? And all you want to do is change history, the present and the future? “Joyeux Noel.”

Can we get back to politics, please?, Future, Rantin'