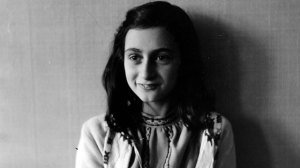 Anne Frank is a figure I grew up learning about. Her story was my first introduction to the horrors of the Holocaust– I was six years old, and had been gifted a series of picture books about influential women. I remember Anne’s profile told the story of a brave young girl who had to hide behind a bookshelf to protect herself from being found. It was so oversimplified that when I got to the end, and there was an illustration of Anne and her sister, Margot, emaciated with shaved heads, I was both taken aback, incredibly scared and confused. She was just a little girl, like me. What happened to her hair? Why was she so thin? Why did she have to die?

That was my introduction to that era in history. I was confused and mystified. I put the book under my bed because it scared me so much. Just like learning about 9/11, or any other sensitive, cataclysmic event, my mother told me what happened in doses. — And Anne was an incredible model to branch out from. This young girl, around my age, had experienced something I couldn’t even begin to fathom. Truly. She lived what she wrote, and an illustration was already too much for me. It humanized that time, and grounded what had happened. The Holocaust moved from a complete focus and fixation, in my mind, on the graphic details, to something I could make a little more sense of.

I always wanted to understand and see the world concretely when I was a little kid. Someone had to do something bad to deserve punishment. What did Anne do wrong? It really, really scared me. The complete lack of sense kept me up at night. I read Anne’s diary when I was 12, and I was amazed by how much I felt I understood what she was saying, on this deeply human, pre-teen level. The fights with her sister, wanting to get her period really badly and just be a woman already, having a head always stuck in books and fantasy. I related…

I don’t know what to say because I don’t really have a profound statement or assessment of this. I still can’t answer why. (Who can?) All I can say is, going to Anne Frank’s house, seeing her diary, her room with pasted postcards and pictures of celebrities, it was powerful. It made me emotional and pensive and withdrawn for the rest of the afternoon, because I felt like I was in the presence of this incredibly spritely spirit of a girl.

The museum was about Anne. Anne’s experience. Anne’s interpretation. I felt proud of her. I wish she knew how many people came to read her story and identify with her. From what she writes, as I re-read her diary on my return home, I think she would have loved to know the impact her experience had on the world’s comprehension of that time. Especially small children. Very moving.

(N.B. The book I read when I was younger is titled, “A Picture Book of Anne Frank.” It was written by David A. Adler, and illustrated by Karen Ritz.) 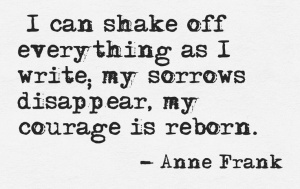